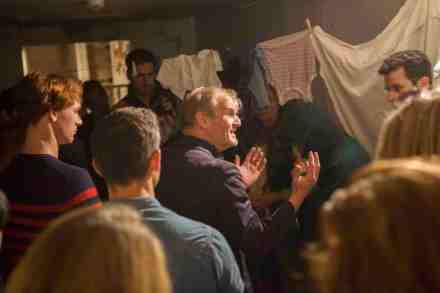 In September 2016 I directed scratch performances of ‘Til We Meet in England’, at Safe House in Peckham as part of the Peckham Festival, merging text-based performance with site, movement and installation. Til We Meet in England’s starting point was the coming together of Elizabeth Inchbald’s tragedy, The Massacre, with the intimate domestic, near derelict site of Safe House.

The Massacre is a remarkable text written by Inchbald in response to sectarian intolerance in the French Revolution, which has much to offer today. This text, and its engagement with experiences of displacement across Europe, resonates with current experience, and also highlights a long view, in which such movement across the continent has been a familiar and recurring event. Inchbald depicts her persecuted family, the Tricastin’s, with great humanity and empathy, a valuable voice to hear today, and she is explicit in placing England as a place of humanitarian refuge.

Working in Safe House with this text, the themes of seeking ‘home’, of finding sanctuary, of the precariousness of life and of the value of sharing all became strongly present for audiences, as we share the same intimate space as performers, and make a journey

Safe House is a tiny, domestic house which has reached a point of near-total dereliction. Quoting Tadeusz Kantor’s landmark ‘Odysseus Returns’, this house as a setting interacts with the text of The Massacre, through performance, encounters with characters, with music, with fragments of installations and recorded audio from recent British political life.

The intimacy of the space, as a home which h 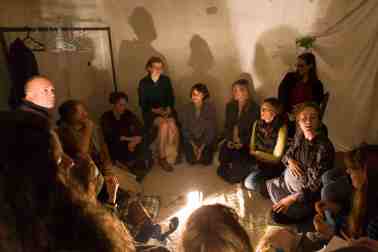 as become unhomely, works compellingly with the plays’ themes. The piece gathered momentum as sections of Inchbald’s depiction of an emerging fascist leader were performed, at which point the audience members are put in role as fellow mob members in the claustrophobic space of the living room. Here audiences became physically involved with the action as they wish to be, and are (more significantly) all ‘active participants’ in that they are called on to consider both the moral questions in play, and at the same time to encounter with empathy the characters who are caught in the drama.

It was thrilling to find all of the performances sold out and I’d like to thank Sydney and the whole Peckham Festival team for making the work happen. We plan to bring the performance back in a longer run, in 2017, and are seeking funding and partnerships to make that happen. If you would like to be involved or support the project, please see our Crowdfunder page to support this extraordinary project and find the kinds of rewards and events you can be part of as a supporter.

A Testimony and a Silence Bette & Joan Bodies and Matter Dido at Kensington Palace Dido at St Barnabas Margaret of Anjou Mariam at Burford Mariam in Peckham - The Cary Cycles Peckham Research Site Specific Still Life Theatre The Mariam Project The Massacre The Round Dance Til We Meet in England Vincent River
Rebecca McCutcheon
Blog at WordPress.com.
Loading Comments...