In 2003 I directed angels in the architecture’s first full-scale production, a staging of Still Life by Noal Coward in the disused Aldwych tube station on the Strand in central London.

The station is a beautiful, ghostly 30s station close to the Aldwych, unused since the 80s, which had the feeling, as I entered, of still holding the threads of the lives which had passed through their over the years.

Coward’s Still Life is a gorgeously understated portrait of love and duty in pre-war home counties England. Its the play which inspired Brief Encounter, and contains the core of that filmic work. The play version also contains a rich seam of characters drawn across society, and lends itself to ensemble playing.

…the sanest reason imaginable to sit in a disused tube station

A model of what fringe theatre can be, and a delightful option for the theatre-lover looking beyond the West End…unlike the film, you’re more likely to come away from this Still Life laughing than crying…well worth the very slight detour to this unfamiliar and unlikely venue”

..an inspired design…angels in the architecture has discovered that Aldwych Tube Station has more than enough atmosphere for reigniting ardent impulses among theBath Buns… 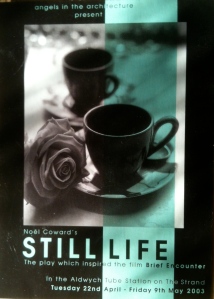 A Testimony and a Silence Bette & Joan Bodies and Matter Dido at Kensington Palace Dido at St Barnabas Margaret of Anjou Mariam at Burford Mariam in Peckham - The Cary Cycles Peckham Research Site Specific Still Life Theatre The Mariam Project The Massacre The Round Dance Til We Meet in England Vincent River
Loading Comments...
Comment
×